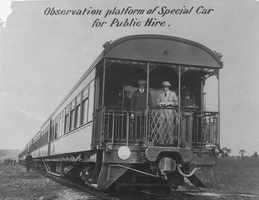 The Commonwealth Railways line between Port Augusta and Kalgoorlie had opened in 1917 and as the opening day approached it became evident to authorities that they were lacking in a vehicle that could be used by such eminent personages as the Governor General or visiting Royalty. Early in 1917 car, which had been designed as a lounge car, was prior to completion converted to a special service car for use on opening day. The workshops worked frantically to get car finished in time, fitting it with two bedrooms, dining room and staff quarters which whilst elaborate never really adequately meet the railways requirements. The car, now known as "AFR 27", was too short, being only 50 foot, was cramped and lacked kitchen facilities comparing unfavourably with similar vehicles in use on the state railways. 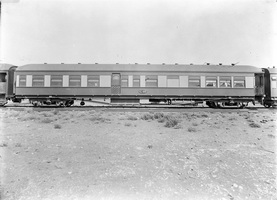 At the time of the conversion the Commissioners office in Melbourne had plans drawn up for the construction of a new purpose built vehicle to replace the temporary one. The Port Augusta drawing office produced plans for an additional special service car which was too meet with approval and construction commenced in 1918, but was prolonged due to lack of funds. 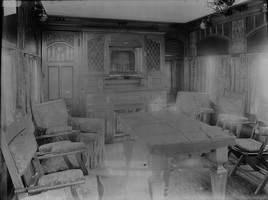 All materials including timber, furnishings and glass were purchased by the Melbourne office and forwarded to Port Augusta, generally by boat. Only the best quality materials were used including steel ceilings by Wunderlich, ornate light fittings and Cathedral glass panels in each of the doors as well as a large quantity of seasoned timber.

"The car is 76 foot 7 inch in length, with a width over all of 10 foot 6 inch, and is arranged so as to accommodate ten persons. There are four two-berth compartments similar in all respects to the compartments in the standard first class sleeping car. There are also two single berth compartments separated by a folding partition, which, when folded, converts the two compartments to one large room and can be used as a private sitting room or bed room as may be necessary. The beds are of folding type, and when not in use they are folded against the compartment partitions. The rest of the car forms a saloon fitted for a lounge or dining room; from the saloon there is an entrance to an observation platform. Hot and cold water service is provided in each compartment. In addition there is a bathroom with hot and cold plunge and shower baths.

A kitchen is also provided, making the car self contained, and avoiding the necessity of providing a dining car when not attached to the ordinary passenger trains.

The special service car is built of Australian timbers throughout, lighted by electricity, and is provided with "electric radiators and fans.[CR operation for year 1919-20. CPP 1920, No.68] 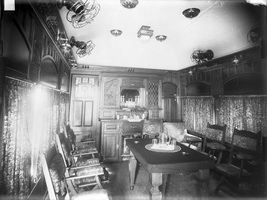 Nothing was spared for this vehicle as shortly before construction was complete it was realised that the visit of the "Prince of WaleS" would see the cars first official use. This allowed additional funds to be found allowing more elaborate internal fittings and furnishing to be used. Well known wood carver Robert Prenzel was commissioned to adorn the walls of the dining saloon with elaborate wood carvings featuring the Australian, British and State coats of arms. 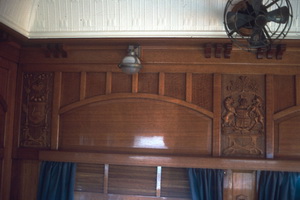 The travelling public was to highly praise the vehicle which featured large sleeping berths separated by a folding screen that could be used to make one double compartment, full length cathedral glass in the doors, enormous windows by Australian standards and very high roofs that give a spacious feel to the car. The bathroom featured a real bath not just the shower alcove used in other Commonwealth Railways carriages. The very large loading gauge of the Commonwealth Railways when compared to the other Australian rail systems, allowed them to build rollingstock that was very spacious. The Special Service car is 14 foot 2 inch (4.318m) high and 10 foot 6 inch (3.2m) wide, and when you see this carriage coupled with one of the more modern, yet smaller and longer, stainless steel Comeng built cars, you can clearly see the effect of the additional width and height. 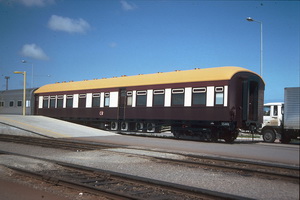 Car "SS 44", as it is officially known, had a chequered history. It entered service on 23.4.1920 when the Commissioner took it for a shakedown trip. The Commissioner in his report praised the tradesmen for the excellent job they did on the car, something not normally done as the Commissioners visits usually found fault in everything not praise for how well things had been done. It first official in service trip was on 3.7.1920 when HRH the Prince of Wales travelled from Kalgoorlie to Port Augusta. During the trip the open observation deck was to prove valuable as it allowed the Prince to be seen by the large crowds that turned out. Despite the official name of the carriage being "SS 44" and later Special Service Car No.1, the new car became known as the Prince of Wales car; and with the extra fittings required for the Royal visit, had cost a total of £10,154 ($20,308), at a time when the average yearly wage paid to employees was about £250. 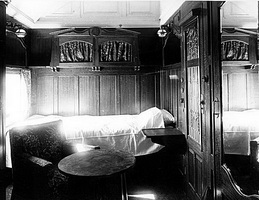 Over the next few years Commissioner Norris Bell arranged to purchase additional furniture and made some minor modifications which were to be later described as follows by the South Australian Railways Head car draughtsman F.James, in a special report written in 1934 at the request of the new Commissioner G.A.Gahan.

My first impression apart from the colour scheme which is obviously wrong, was the drab and uninviting appearance of the bedrooms. The furnishings seem to crowd one, the wardrobe capacity being sufficient to hang at least fifteen suites it is entirely out of proportion and dominates the compartment. It would not have been so hopeless if an attempt had been made to build the furniture to match the design of the compartment. In fact all I can say about the furniture is that it jars on one's sense of good taste. There is no attempt to tone in with the surroundings, it entirely out of proportion, and has not added any additional comfort to the car......

It is hard to know what to do with the bedrooms to make them attractive and restful.

Commissioner Gahan sent the wrote the following in reply:

"I thought you would be rather shocked on seeing the alterations. It certainly was not me; it was done during my absence abroad, and nobody can understand Mr. Bell's attitude - particularly as we know him as a man of good taste."

As a direct result, the car was again refurbished in preparation for a Royal. The car was returned to its original layout and style, all the rosewood furniture was sold and the soft furnishings changed to shades of green and rose as was originally intended. 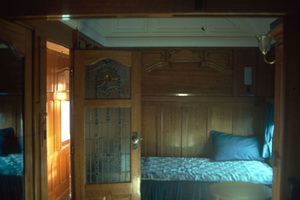 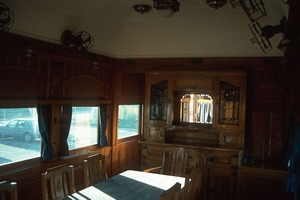 As World War Two approached funds which had always been scarce became almost impossible to obtain and the car remained substantially unaltered. After the close of the war it became evident that the Commonwealth Railways were not in very good shape and an extensive upgrading program, which included rollingstock purchases, was implemented. The purchase of the luxury all-steel German Wegmann stock, Budd railcars and a program of refurbishing and air-conditioning of existing wooden carriages ensued. Part of this post war reconstruction involved the Commissioner making the following recommendations for alterations to "SS 44" following his Christmas inspection of 1953.

It doesn't take much imagination to identify were the ideas for improvement came from, only the year before the new Wegmann "Lounge" cars had arrived featuring, aid-conditioning, modern lighting and styling and a torpedo observation end. Luckily due to a lack of funds, the work was delayed and then cancelled in 1956, leaving the car unaltered, but again resurfaced in 1960 when the observation end was closed in and the car repainted red and silver. At this time, the truss rods were removed and replaced with welded angle truss rods permanently fixed in place. 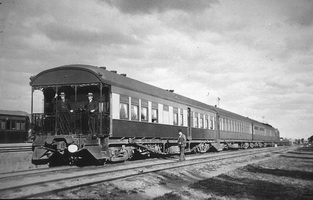 Whilst on loan to the South Australian Railways, for an Inspection of the new Standard Gauge line from Broken Hill to Pirie, the car's air brakes failed at Broken Hill and it rolled out of the station, down a steep incline, onto the siding of the North Broken Hill mine eventually coming to a halt after smashing into a loaded ore wagon causing serious injury to two occupants of the car and extensive damage to the saloon end. The saloon end was subsequently rebuilt, chairs replaced, soft furnishings renewed and the car modified to make it "bogie exchangeable". 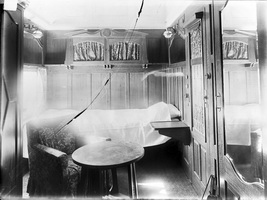 Sadly, over time "SS 44" was vandalised and neglected until ultimately a decision as to its future need to be made. Many people, including workshop staff, expected the car to be written off and if lucky be purchased by a museum, instead funds were made available to refurbish it for use on the upcoming "Opera in the Outback". This work, which took place early in 1988, has returned the car to its former glory. Bringing back the days when the Commonwealth Railways "Trans-Australian" was on the of the great luxury rail journeys of the world. 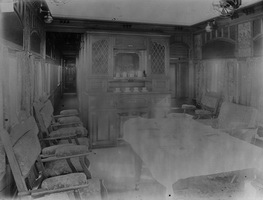 All work on the car was performed at Australian Nationals Port Augusta workshops. During the refurbishment the car was returned to its original interior styling except for some minor alterations made so that air-conditioning could be provided. Exterior livery became the 1930's Commonwealth Railways chocolate and cream with mustard yellow roof and CR centre panel logo.

Subsequent to the refurbishment, "SS 44" first run was on the "Opera in the Outback" as part of the VIP train. Since then the only modification was to replace the wooden "CR" with a cast plate bearing the Australian Coat of Arms.