Kitson and Company of Leeds, England, in 1906, supplied the South Australian Railways with two combined engine and carriage units for use on their rail system. The engine units were built by Kitson and Company and the coaches by the Metropolitan Amalgamated Railway Carriage and Wagon Company of Birmingham, England. Know only as "Steam Motor Coaches" 1& 2, both coaches were for use on narrow gauge lines. 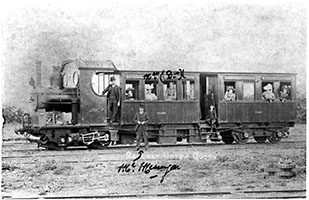 Steam Motor No.1 was allocated to the Northern Division and was used mainly between Quorn and Hawker on a weekly service. A small four-wheel van was usually attached for parcels, and locals gave it the nickname the "Coffee Pot". When the Commonwealth Railways took over operation of the the Port Augusta to Oodnadatta railway they purchased the "Coffee Pot" from the South Australian Railways and reclassifed it "NJAB 1". It continued to operate out of Quorn until 1931 when it was stored in a shed at the depot. During the 1960's the Coffee Pot was despatched to Alice Springs where it was displayed in the open near the railway station.

In 1973, the Pichi Richi Railway Preservation Society acquired the Coffee Pot and it was returned to Quorn for restoration to operating service.

Steam Motor Coach No. 2 was similar to No. 1 except that a driver's compartment was provided at the trailing end, slightly increasing the length of the coach. This unit was allocated to the South Eastern system and was initially used between Naracoorte and Kingston. But, due to poor passenger numbers it was realloacted to operations between Mount Gambier and Beachport. By the mid-1920, Steam Motor Coach No. 2 was seldom used leading to engine unit being sold, in 1935, to S. J. Stuckey and Son of Beachport and adapted for shunting requirements on their jetty. 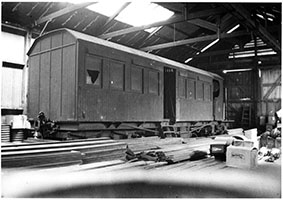 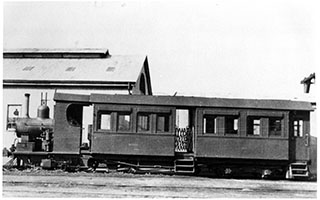