The five members of this class were converted from "BDSE" Travelling Post Office (TPO) cars. The Original 7 "EBSV", later "BDSE" TPO's with passenger accomodation were built at Newport in 1909, with a further 3 in 1910. Five of these cars were rebuilt into standard "BE" cars in 1923 (they became 44 BE, thru 48 BE), the remaining 5 were rebuilt from 1935 to second class passenger cars with guards compartments, with a new design underframe which did away with the need for truss rods. The underframes for the rebuilt car is of a centre sill gondola type and was especially built to utilize the old headstocks and side sills. Several structural alterations were made to the body. The entrance to the ladies lavatory was relocated from the ladies compartment to the corridor, thus increasing capacity by one seat. The sliding door was widened to 5 feet 6 inch and moved to the centre of the 23 feet 6 inch section, now used for van goods. Nine tons of van goods could be carried.

The central guards compartments facilities included a desk and letter rack in the 3 feet 10 inch space corresponding to the ladies lavatory. A dog box, with access by a lowered door from the outside of the coach only, was fitted to one side under the elevated guards seat. Lastly, the two things which altered the external appearance was the provision of two 2 feet 6 inch wide doors on each side, in the guards section and a raised roof lookout with handbrake pedestal and emergency brake valve. Side lights were fitted externally to van walls. Dimensions are the same as the "AE" and "BE" cars. They consisted of passenger compartments at one end seating 40 in 5 compartments, with an additional 2 seats opposite the mens lavatory, and guard/goods storage at the other.

"BCE" cars were used as through cars to destinations such as Pinaroo SA, connecting with the Mildura line trains at Ouyen. 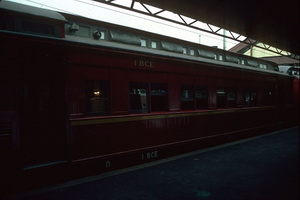 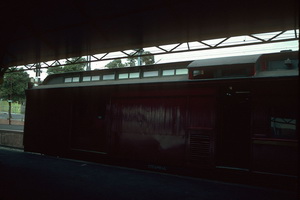 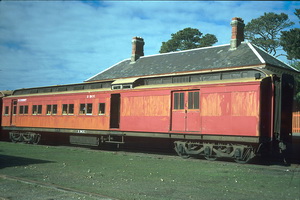 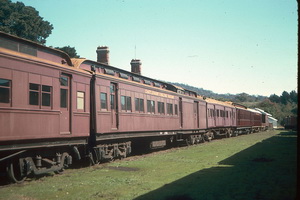 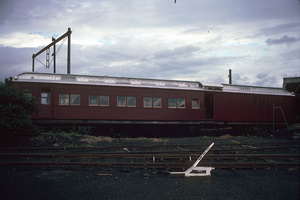