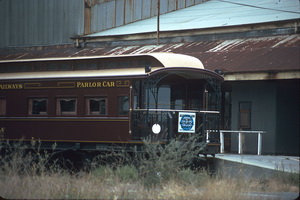 Built at Newport Workshops by the Victorian Railways in 1906 as one of two Parlor cars (the other being "Murray", for use on the "Sydney Limited". Metal ceilings impressed with an arabesque design, decorated leadlight segments overhang the large side windows, observation platform on rear end and Well padded leather armchairs with footstools.

During the first year of parlor car operation these coaches were marshalled at the rear of the train behind the brake van. This practice meant that the passengers had to pass through the brake van, but with the provision of a dining car the trains marshalling was altered to have the brake van leading. The marshalling order was, from the locomotive; brake van, two second class coaches, diner, three first class coaches and parlor making up an eight car train weighing 250 tons. Eight bevelled mirrors were set above the double width windows and the legend VICTORIAN RAILWAYS was centrally located on the letterboard flanked by the title PARLOR towards the ends. The American spelling of parlor was adopted by V.R.. 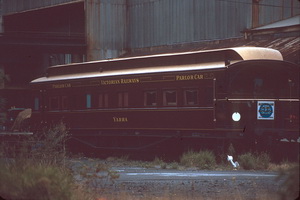 As built, the internal arrangement of the cars, from the vestibule end was as follows. A mens lavatory, 3 foot 9-7/8 inch long, with an open wash basin compartment, 3 foot 8½ inch long, opposite, was separated from a smoking room by a sliding door. This 12 inch 4½ inch long room had five chairs and a fixed transverse seat for three. The two entrance doors opened into this room. A 2 foot 3 inch wide corridor skirted a 6 foot 3 inch long conductors compartment, the ladies lavatory and two 7 foot 3 inch long compartments ending at the 22 foot 6¾ inch long observation room. These doors were later removed. The conductors compartment was equiped with an ice chest, gas hot water urn, cupboards and luggage space. An outward swinging door was provided in this compartment and in the corridor wall opposite to facilitate the handling of passenger luggage. Beside the conductors compartment the 4 foot long ladies lavatory with separate washroom facilities was located. Two arm chairs and a fixed seat for three provided the seating accomodation in the two special compartments, one of which was reserved for ladies. Access to all compartment, except for the lavatories was by sliding 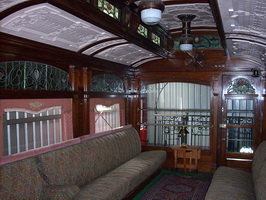 door, while the lavatories were fitted with inward swinging doors. The observation room boasted twelve arm chairs, a writing desk and chair, a table for illustrated papers and, at the compartment end, a fixed seat for three with a bookcase above it. The rear wall was a huge plate glass window and an inward swinging door, which gave access to the 6 foot long observation platform. Folding chairs were provided on this platform. An ornamental wrought iron railing, waist high, surrounded the rear of the platform and two hinged gates (normally kept locked) were provided. The clerestory roof was supported by iron stanchions on the rear corners and a small window was provided in each side of the observation platform wall. 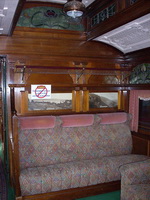 In 1940 it was placed into storage at Ballarat workshops, until 1954 when it was used on Royal Train rehearsal.