The largest operating power used by the Commonwealth Railways in the early years of the Trans-Australian Railway was the "G" class locomotive. Whilst, by later standards the hauling power of this class of engine was not overly large, it provided the backbone of operations prior to the outbreak of World War II. The Commonwealth completed construction of the line between Kalgoorlie and Port Augusta in 1917, but right from the outset of construction the need for a reliable proven design of locomotive had been identified. 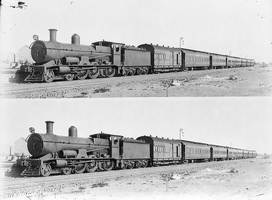 Lack of funds and an urgent need for big locomotive power early in the construction phase of the Trans-Australian line resulted in the Commonwealth Railways adopting a policy of only purchasing a steam locomotive design that had proved itself on another Australian Railway system. Normally the only work actually done on the design by the locomotive department was to nominate the modifications required to meet the local conditions. When looking for a good design for use on the Trans-Australian, the highly successful 4-6-0 "P" class, later "C32", of the New South Wales Railways was chosen. In December 1912 it was proposed to purchase 4 locomotives based on the "P" class These would be used during the construction phase, with additional larger locomotives being purchased prior to the commencement of full operations. 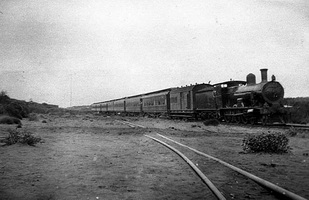 The Commonwealth Railways advertised extensively, obtaining 10 different quotations, with only very slight modifications being made to the original NSW design. The NSW side buffers and draw gear were replaced by "Sharon" auto couplers and cow catchers fitted to the front. A maximum axle load of 18 tons was envisaged.

The best tender, able to meet early deliver, was that of the "Baldwin Locomotive Works, New York" for a total cost £20,456. They also submitted an alternative engine type that would have cost £15,799, but it was considered unsuitable. The only two Australian tenders, Clyde and Walkers Ltd, each submitted the most expensive tenders being £26,200 and £29,400 respectively.

Now the political point scoring started. The Government approved the purchase of the four engines from Baldwin on 13.1.1913 and sent a letter off to Clyde advising that as the engines were required urgently and Clyde's delivery was so late that it was necessary to make other arrangements. Baldwin could deliver in 4 months, Clyde would take just under 12 months. By the 23rd of the month a ministerial enquiry was being raised as to why it was necessary to import American engines, especially when Walkers had agreed to reduce the quote by £3,000 an engine. By the 30th, a letter stating government policy was against the purchase of locomotives outside of Australia was received by the Commonwealth Railways, forcing them to rethink their locomotive acquisition. This resulted in the Minister, King O'Malley, approving the purchase of 4 engines from Clyde's on 7th of February. Following their reduction in quote price, Walkers had asked to withdraw from the tender as an urgent order of 25 engines for the South Australian Railways had been received, which meant they could not complete the Commonwealth order by the expected delivery date.

Clyde were ecstatic, and promised to have the first engine delivered by 7.10.1913 and this last by 7.12.1913. At the same time as this engine order, Clyde were also constructing 100 flat wagons also destined for the Commonwealth Railways. Work progressed slowly, with weekly progress being reported by the Commonwealth inspector appointed to monitor construction. By August it was obvious that the engines would be running late. The "D" class construction engines, which had been purchased cheap from the New South Wales Railways were causing problems, delaying line building and just failing without warning, as well as having a hauling power well below requirements. An additional 8 engines of the NSW "P" type would be required. At this stage they had not been given the classification of "G", but were only referred to as engine No.1, No2. etc.

Originally the tender had been for 4 engines because if was hoped that technological development in internal combustion locomotives would make the steam engine obsolete within a reasonable time frame. Unfortunately the expected developments did not happen, and more power would need to be obtained. This lead to further consideration being made into the prospect of purchasing a further 8 engines. It looked like the first engine would now be delayed until December, with it eventually being delivered to Port Augusta aboard the S.S. Lammeroo which sailed on 28.1.1914. By this time a formal locomotive classification system had been adopted that identified the new engines as the "G" class in the ranger No.1 to 4. By definition a percentage rating of 100% was given to the "G" class engines, and was attached to the front of the funnel in 3 inch brass letters.

Delivery of the second engine, which was shipped to Freemantle and then by rail to Kalgoorlie, began aboard the S.S. Katoomba on 7.2.1914. By this time a trial run with the first engine to Hesso had been undertaken, leading to a full trial run under load to Bookooloo on 24.3.1914. Of the remaining two locomotives, one each was shipped to Port Augusta and Kalgoorlie.

Several months prior to the delivery of the first Clyde "G" class, consideration had been given to the need to additional power. It was proposed to get an additional 8 "G" class with larger water capacity (4,500 gallons) and 7½ ton coal. Delays with the Clyde order and the lack of alternate suitable Australian builders, enable the Commonwealth Railways to convince Parliament to let them call overseas tenders. This resulted in the purchase of four engines from "Baldwin Locomotive Works, Philadelphia, USA". The second and subsequent orders of engines had larger tenders capable of carrying 4,500 gallons of water and 7½ tons of coal instead of the 3,500 gallon and 5 ton capacity of the original 4 tenders built by Clyde. These tenders were later all enlarged to a capacity of 4,850 gallons and 10 ton of coal. As the Baldwin delivery time was far quicker than that of Clyde and it had become obvious that internal combustion locomotives would not be available, a second order of 8 locomotives was placed with Baldwin. These were shipped ex New York a few months later aboard the SS Essen which unloaded 5 engines at Kalgoorlie and the remainder at Port Adelaide.

Official Baldwin specification was described as

Purchasing engines overseas was rather controversial; even un-Australian and had only been allowed as a special dispensation. When the Commonwealth again asked for locomotive power, as a result of the previously identified power shortage, an order for a further eight locomotives was place in 1914 with the "Toowoomba Foundry Co. Ltd., Queensland". This contract was extended to ten in May 1914.

Delivery of the four Clyde units had began in 1914 and the ten from Toowoomba were completed by mid 1917, resulting in a total of 26 locomotives. The Toowoomba Foundry tender had been accepted on the basis of the first locomotive being delivered in 14 months and then 2 every 6 weeks, 4 to Kalgoorlie and 4 to Port Augusta, making a total of eight. The other two would only be required if delivery could be effected within 12 months rather than the original 14 months. Toowoomba advised that the 12 months deadline was not obtainable but if the order was increased to 10 locomotives they would deliver two per month rather than every 6 weeks. This offer was accepted at a cost of £6,128/5/- to Kalgoorlie and £6,088/5/- to Port Augusta for each locomotive. By early 1915 it had become obvious that Toowoomba were very much behind and the Queensland Railways were asked if they would be willing to complete the locomotive boiler work. Subsequently the boilers were all moved to the Ipswich workshops then returned to the Toowoomba Foundry for erection on the locomotive frames. This resulted in eventual delivery of the first locomotive, "G 17", in June 1916 and the last by October 1917. Prior to this contract, the Toowoomba Foundry's major construction had been Southern Cross windmills and other farming machinery. With calculated damages, due to late delivery, of £105,267 against a contract price of £63,005/10/- it looked bad for the future of the Foundry should the Commonwealth Railways hold them to the initial contract financing. After negotiations, the Commonwealth agreed it would be fair to pay Toowoomba's basic cost with no allowance made for any profit.

Initially it had been intended that the "G" class engines would only be used on goods trains, with a newer high speed pacific type design being purchased for the passenger trains. When it became obvious that funding was short with World War I taxing the nations resources and the purchase of further engines could not be undertaken before the line opened, the "G" class units were upgraded to make them suitable for through-express working. Plans for a new pacific type locomotive, to be known as the "H" class, were eventually discontinued due to the unballasted lines inability to take the weight of the planned locomotives 20 ton axle load.

When the first westbound express pulled out of Port Augusta on 22 October 1917 it was "G 21" who had the honours, but only as far a Pimba were it was replace by G 12 due to a hot axle box. Further failures resulted in the train having 11 engines changes before it reached Kalgoorlie. It had been hopped that on a normal scheduled run, the first engine would be replaced by another unit when it reached Tarcoola, 257 miles from Port Augusta. The second engine would travel 256 miles to be replaced at Cook. A third engine would take the train 303 miles to Rawlinna where the final engine would take the train the 235 miles to Kalgoorlie. Nearly all the locomotives suffered from severe problems due to sand causing hot boxes on both the locomotive and tender and, until rectified frequently resulted in more than four engines being used to complete the haul. Eventually four engine working became standard practice until it was decided to through work the first engine to Cook with water and coal stops being provided along the route. A second locomotive then took the train from Cook to Kalgoorlie. When introduced, this was hailed as the longest run undertaken by coal burning steam locomotives in the world.

During the first few years that the "G" class operated on the Trans-Australian Railway they were not fitted with headlights, but by the time the first through passenger train began, kerosene headlights were in use. Eventually electric headlights were fitted, but one must wonder about the poor drivers who on a dark night had to keep a look out for animals and people wandering onto the line.

In 1933 "G 24" was fitted with a steam superheater and its cylinder diameter was enlarged from 20 to 21 inches improving its power to weight ratio so that the tractive effort was raised from 22,000 to 26,000 pounds. A further six locomotives were similarly fitted, with all locomotive being reclassified to become the "GA" class. At about the same time, a square cab window was fitted which included a louvre to provide better protection for crews during the frequent dust storms.

Only one member of the class "G 1" has survived the scrapers torch and is now preserved at the Port Dock Station Railway Museum in South Australia, thanks to a thoughtful staff who had it stored when it was withdrawn from service. Some controversy surrounds which unit this engine actual is. The boiler records show that this locomotive has the boiler that was last on "G 2" and photographs do exist of what is "G 1" stripped down to its underframe ready for scrapping. All the evidence suggests that "G 2" was renumbered "G 1" sometime after being withdrawn from service. 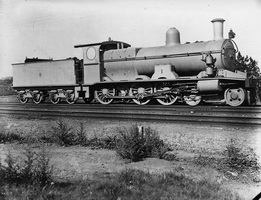 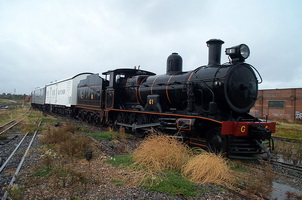 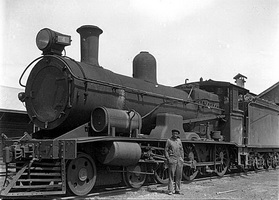 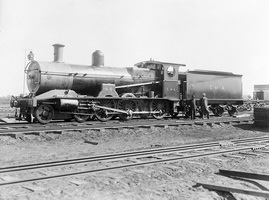 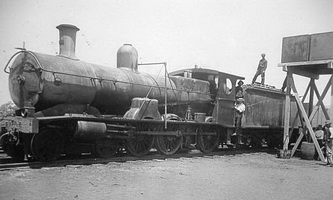 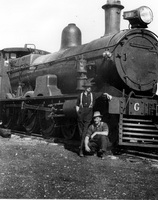