The Commonwealth Railways took delivery in October, 1960, of twelve passenger vehicles which were manufactured in Japan. The contract comprised four second class sleeping cars, two second class sleeper/lounge cars, two power vans and four brake and crew vans built by the "Kinki Sharyo Company" of Osaka, Japan". Structurally, the cars are similar to the Wegmann type and are fabricated from steel plate, sections and sheet to Japanese Industrial Standards.

The "BRFC" class second class sleeper-lounge cars were a radical departure from existing practice, in that two-berth compartments were provided instead of four-berth, this accomodated 20 passengers in 10 compartments, with seating capacity in the lounge section for 36 passengers. The four-berth compartments had certain disadvantages, chief of which was that a man and wife had to be separate and share with strangers. In effect, the new cars contain two-berth roomette compartments. The existing first class roomette layout was adopted in part with the major modification of adding an upper berth and a permanent seat to replace the visitors seat. The staggered corridor was retained and the compartments were trapezoidal shape in plan, providing dressing and toilet space with the door closed. The lower berth pivots to stand in a vertical position against the cross partition in the usual roomette manner, the two seats collapsing to allow the berth in its down position to be as low as possible yet comfortable for the passenger. 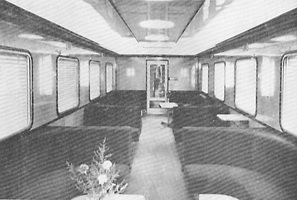 Seat upholstery was fine quality moquette with a vertical rib pattern, colours being rust-red and bright green in alternate compartments.

A stainless steel washbasin folded out of sight behind a hinged panel that blended with the wall lining resulting in a further space gain. Below the basin, a cabinet housed a waste receptacle, while above it was a toilet shelf, mirror, mirror light, electric shaver outlet and a luggage rack. A lock-up cupboard was provided at the end of the corridor for heavy luggage. Each passenger had their own wardrobes.

Small tables which folded into the outer wall under the windows were provided in each compartment and in the centre section of the lounge.

Seating in the lounge was claimed to be very comfortable. The upholstery material being the same as that in the sleeping compartments except that it is a carmine colour, with blue vinyl floor, maple laminate walls and white ceilings.

All general lighting was fluorescent. In the sleeping compartments there were three individual reading lamps fitted with a 6-watt fluorescent tube. The reading lamp, a flush fitting, also contained the conductor's bell push, a switch controlling the general light and a receptacle for the radio car-horn. The main light fitting also incorporated a small blue night light and the radio speaker. Small lamps, prismatic in shape, were provided at each compartment door showing the numbers of the berths. In addition the conductor's call lamp was situated above the doorway of each compartment, the fitting housing a 24-volt 8-watt lamp, the shade of which operates its own resetting switch when pushed.

A feature new to Australian railway rolling-stock at that time was the automatic door mechanism fitted to the swing door between the lounge and corridor of the sleeper section of the car. The mechanism was operated from a floor switch under a rubber mat on the lounge side and a touch switch on the door stile on the corridor side. The mechanism consisted of a motor and hydraulic pump unit including an accumulator, providing hydraulic pressure to the actuating cylinder. A passenger approaching from the lounge, steped on the mat and the accumulator pressure immediately operated the mechanism opening the door away from the passenger. Similarly, the door opened away from a passenger entering the lounge from the corridor.

As provided in all other air-conditioned cars on the Commonwealth Railways, a radio circuit connected to an amplifier in a central car, give the passenger up-to-the-minute news and musical programmes. In these new cars, this service is extended by the provision of ear-horns which could be plugged into a receptacle on the reading lamp and which enabled an individual passenger to listen to the radio programme without disturbing his neighbour. 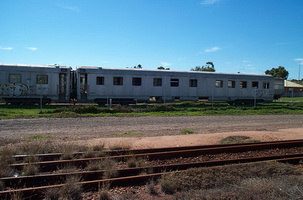 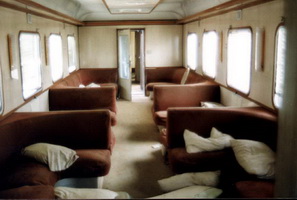 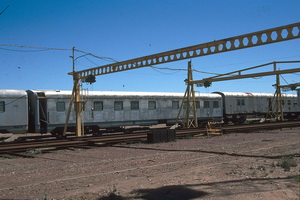